Leaders vs. Laggards in the Printing Industry

I’ve been actively involved in the printing industry since the early 1970s, so I guess you would definitely consider me an “old-timer.”  Although relatively old in terms of physical age, I believe I am younger than most in the industry in terms of my enthusiasm for the industry and the belief that one can still make a very, very good living as the owner of a printing firm.

Sure, the industry has changed dramatically in terms of how we produce many of our products and services. But for every AB Dick or Ryobi press sitting idle back in the corner gathering dust, there is a digital printer up front that is probably producing an array of high quality printed products that would have been unheard of less than 10 years ago. But this article is not meant to address how much things have changed, but rather how much some things have remained in terms of key ratios and profitability. I think you will be quite surprised about some of the facts and figures revealed in the remainder of this article.

While it would be fun to reminisce about all of the changes we have seen, that was not my intention when I began this article. What is most surprising to me is not all the things that have changed in our industry but rather in how so many things have actually remained the same, at least in terms of key financial ratios.

As many readers know, I have been involved in publishing key financial ratio and benchmarking studies for almost 30 years. Along with my good friend and consultant Larry Hunt, we published our first operating ratio study in 1983, and as a general rule these studies have been published on a biennial basis ever since.

One of the things that really irritates me (at my age that happens a lot! <g>) is to hear folks complain and complain about how much more difficult it is these days to compete and be profitable and to keep good employees, etc., etc.

However, if you really dig into the numbers, especially those related to profitability and owner’s compensation, you will find that a lot of things have either remained the same in our industry or actually improved. Let’s take a brief look at three basic financial components found on most profit and loss statements. 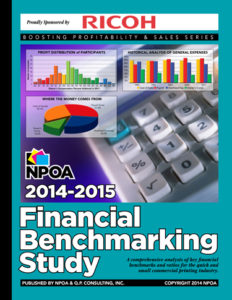 We began tracking “cost of goods” (COG) in 1983. Our simplified definition then and now for “cost of goods” tended to be variable expenses (as opposed to fixed) for those goods and services directly involved or incorporated into producing our products – paper, meter clicks, ink, toner, plates, outside services and outside purchases.

Ok, guess for a second what do you think the COG in our industry was as a percent of total sales in 1983? Drum roll please… 29.7%. So what did we uncover for COG 30 years later? In 2013 survey participants reported their COG to be 30.4% of sales, so close in fact that considering the margin of error COG has most likely not changed at all! Neither space nor time permits allows me to explain the reasons why COG has remained the same – It just has!!!

Ok, let’s take a look at “overhead expenses.” These items or entries tend to be fixed expenses varying little if anything in terms of sales. They typically include items as varied as accounting fees, advertising, auto and equipment leases, depreciation, interest, office supplies, repairs & maintenance, utilities and of course rent, just to name a few.

Putting aside for a moment (and probably for another article) an enlightening comparison between profit leaders and profit laggards, we can tell you that in 1983 the average owner’s compensation in our industry was 17.9%. In 2013 that percent had dropped to 13.7%. The key question is what is the explanation for this drop?

We do know that “cost of goods” has remained almost the same for 30 years, and that “overhead expenses” have actually dropped, so what is left to explain the decline in profitability in our industry these past 30 years?

The answer is quite clear! It’s “payroll” stupid! In 1983, average “payroll expenses” in our industry, as a percent of sales, was 24.3%. The “payroll” category includes payroll, and all payroll expenses such as health insurance, payroll taxes, FICA, workers’ comp., but excludes that which is paid to a working owner.

Oh, by the way – If your current profit and loss statements are not itemizing total payroll expenses under one major heading then you need to make that change immediately just so you can compare payroll costs with others. A special warning – If your accountant, bookkeeper or CPA is placing some of those legitimate payroll expenses down under “overhead” expenses then either fire them, or demand the changes be made immediately. We don’t care what textbook or professor told them otherwise, but if it is related to payroll (like health insurance, or workers’ compensation) then those expenses belong under a separate payroll category, and not under “overhead.”

So what was “payroll” in 2013? The average firm in our industry reported their 2013 “payroll expenses” at 33% of total sales, a whopping increase of almost 9% during that 30-year period. As dramatic as that difference has been, “payroll expenses” have actually stabilized at the 32-33% range during the past 10 years or so, so one could conclude there is “good news” in the revelation that it has stabilized.

You certainly will not get a gold sticker or star from me if your total payroll is in that 32-33% range because (1) that is still too high in my book, and (2) that is an industry average, and certainly you should never attempt to emulate averages! The “profit leaders” in our industry do far better than that in terms of payroll expenses.

The Leaders vs. the Laggards

For most of the past 30 years we have written about leaders and laggards, and we define those terms as referring to the top and bottom quartiles – the top 25% and the bottom 25% in terms of profitability.

When you examine the key ratios referred to above (cost of goods, payroll and overhead expenses) the differences are nothing short of startling – shocking might even be a better word. I am going to allow you to download a key page from the 2014-2015 Financial Benchmarking Study that I published in 2014. You can click here to download a PDF of one of the most important pages in that study – Profit Leader Analysis – All Firms by Profitability.

P.S. You can also purchase the entire study by visiting my bookstore.

Below is a quick breakdown of the key ratios for the leaders and laggards:

After you download the PDF, you will notice that it includes far more detail from the chart of accounts than we have discussed so far, please avoid the temptation that so many printers confront and try to rationalize or explain away why these types of results and ratios cannot be duplicated in your firm.

Too Many Rationalizations in Our Industry 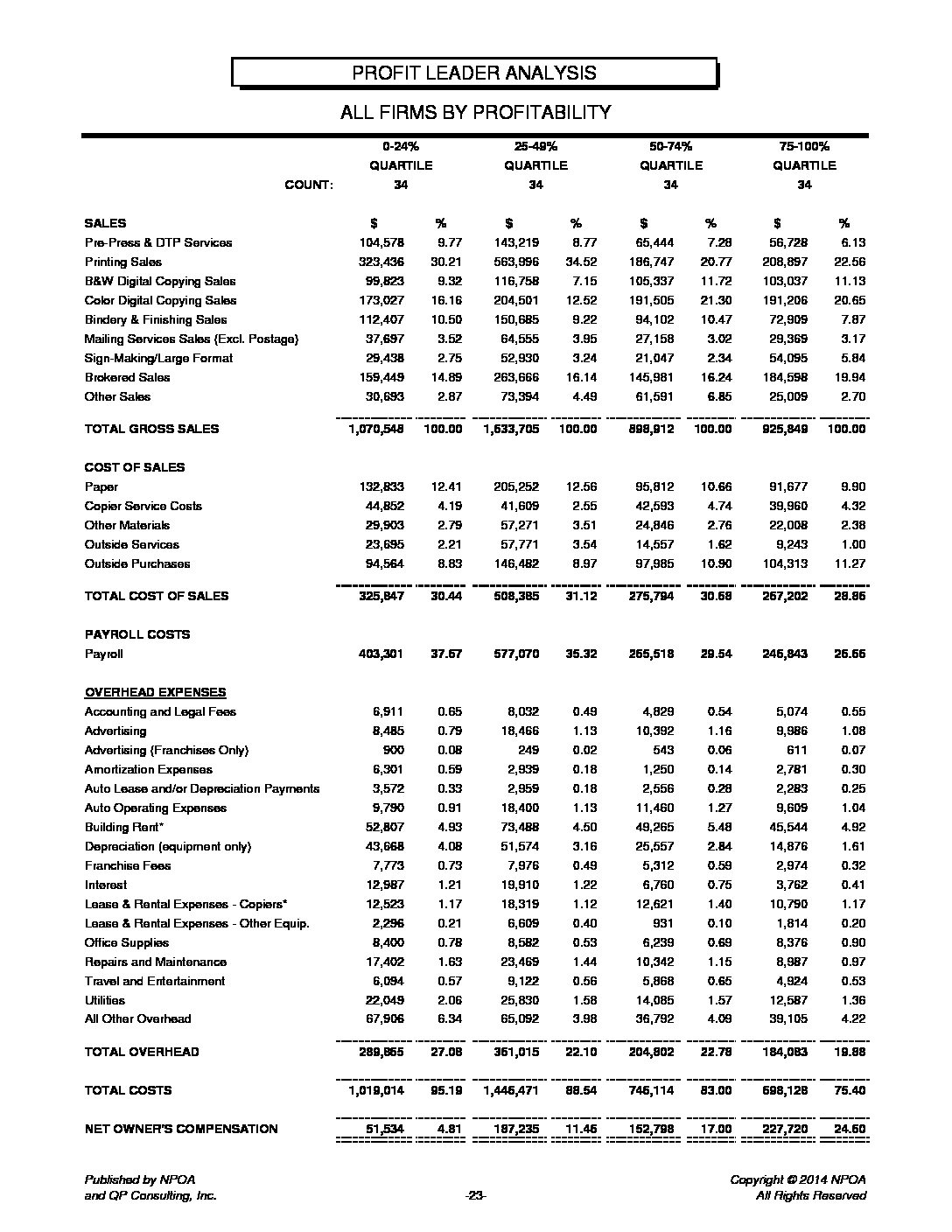 Can you match the ratios for each of the expense categories listed for the leaders? Heck, even I was tempted to follow-up that sentence with “maybe yes, maybe no,” but that would have been a disservice to readers. (You can click here to download PDF of the Profit Leader Analysis depicted to the left. It is taken from the 2014-15 Financial Benchmarking Study.)

What I can tell is that the ratios quoted above and available in more detail on the  free PDF is that those ratios represent the average ratios for those in the top 25%, not the top ratios by any stretch. At least half of the firms in that top quartile actually do better in terms of the ratios presented above. Of course the same can be said of the ratios listed for the bottom 25% of the industry. Half of the folks falling into the bottom quartile are actually doing even worse than the ratios shown.

It is often all too easy or too tempting to explain away why this ratio isn’t realistic, and for you to claim that there is no way you can achieve those percentages for labor or overhead, especially in your market area, but the facts remain that there are printers, with the same mix and size of products that you offer, oftentimes with the same equipment package and even in the same market areas achieving ratios that too many other printers want to dismiss as being unrealistic.

Shame on them, and shame on you if you are among the latter, and not at least willing to print out the PDF, go into your office, close the door, tell folks not to disturb you, and then pull out your year-end profit and loss statements. Then find a yellow highlighter and start marking off percentages that seem high compared to our data.

A Word About SPE and Profitability 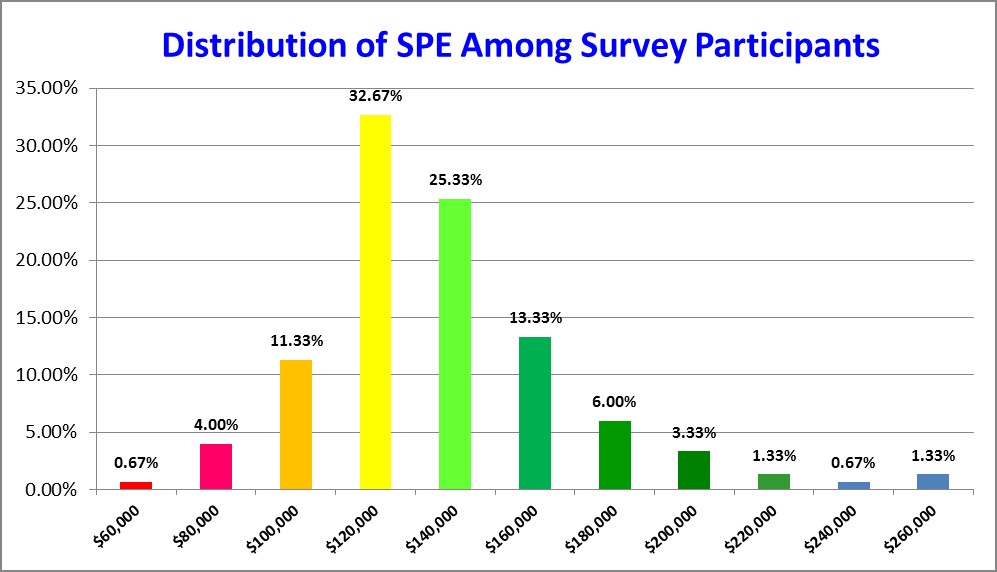 A Typical SPE Chart – Virtually every study we publish on behalf of the industry provides a current chart depicting sales per employee of the survey participants. However, regardless of which study we are conducting, virtually all of the graphs appears similar to the one above with a small percentage of participants reporting SPEs of less that $100,000, and a much larger percentage reporting SPEs of $150,000 and higher.

By the way, there is a relationship between “profitability” or “owners compensation” and Sales Per Employee or SPE. It may not always be linear, but the relationship is nonetheless quite strong. Highly profitable firms almost always tend to report higher than average SPE figures. It is rarely, if not almost impossible, for a profitable firm to find itself with a relatively low SPE. Of course the reverse is true as well.

The average SPE for the entire industry, as reported in the 2014-2015 Financial Benchmarking Study was $124,120. The bottom 25% of the industry was reported to be $114,800. The top 25% reported an average SPE of $142,000. Once again, remember that these are averages of each quartile meaning that there are owners in each quartile achieving both higher and lower numbers than those reported as “average.”

If you would like to purchase a complete copy of the Benchmarking Study you can do so by visiting my bookstore. PDFs are normally shipped within a couple of hours, and hard copies are always shipped out Priority Mail the same day.

Oh, by the way, here’s another reason for firing a bookkeeper or CPA. If your profit and loss statements are not currently displaying the ratios (percentages of expense to totall sales) immediately adjacent to the $$$ entries for each income and expense item then you need to fire the person who prepared them! There is absolutely NO EXCUSE whatsoever for not incorporating into your P&Ls percentages/ratios based upon gross sales for each and every expense category.

By the way, thanks to many friends in the industry for signing up for this free membership and for forwarding me all those copies of email exchanges appearing on the PO list. My problem is I still cannot post to the PrintOwners list serv, and thus it makes it slightly more difficult to respond to individuals requests for explanations and addtional questions. If you do have a specific question about the above you can write me privately at [email protected] and I will do my best to respond. In the next few months there will be some changes and improvements in this situation but for now “it is what it is!”

P.S. Although all material appearing on this web site is copyrighted, you are free to liberally quote or discuss this article on various printing related list servs and discussion groups.