Printers Tell Us That Industry Studies & Polls Are Top Picks!

Are Associations Meeting the Needs of Members?

Please note this article is confidential and copyrighted. Please do not share or redistribute. Thank you.

Printers in our industry, at least the 163 firms who responded to our most recent survey, told us they still place a high value on research studies, as well as surveys and polls about printing related topics. In fact, those two services, combined with the desire to share “confidential information” with fellow members, receive the highest ratings when compared to other services typically offered by trade associations, according to our latest survey.

The purpose of our recent poll titled, “Printers & Their Affiliations,” (conducted July 7-12, 2016), was intended to serve multiple objectives. Among the objectives was to determine the current role that trade associations play in our industry, as well as to uncover, if possible, their strengths and weaknesses as well.

A third objective was admittedly a bit self-serving since QP Consulting is actively exploring various options as to how it can expand its services and further serve an industry with which it has been closely associated with for more than 30 years. We basically wanted to know what printers expect of their trade association and where we might fit in regards to these expectations.

While we believe some of the results we uncovered in this survey are indeed representative of the printing industry at large, we also know that some of the statistics we gathered are skewed as a result of the source(s) we turned to in order to gather our data. We will explain the skewing factor in a few minutes.

We first asked participants to tell us whether they were an independent or a franchisee. The results we received pretty much mirror the results we’ve been getting in surveys for more than 25 years – 88% of our respondents indicated they were independents, while 11% said they were franchisees. One firm did identified themselves as an “in-plant.”

The 88-11% independent to franchise ratio is typical of the response rates we have received for similar studies and surveys conducted in the past. That ratio is fairly close to the actual ratio that exists within the broader “quick/small format” segment of our industry, and not just those who tend to participate in our surveys.

Nonetheless, because the data base we often use to market and promote our surveys is heavily weighted towards printing firms who are either current or former members of trade associations, some of our data is skewed in favor of associations. We also recognize that some of the results we report may not reflect the desires or opinions of the broader printing industry.

Nowhere is the possible skewing of results more noticeable than when we asked participants if they belonged to a trade association. Seventy-five percent of our respondents (75%) said “Yes” they were a member of a trade association, while the remaining 25% told us “No.” This is almost the exact reverse of what you would expect for the industry as a whole.

Common sense alone suggests that the above numbers are almost totally reversed from what that ratio really is in this industry. We estimate that at the most only 18-22% of printers in our industry actually belong to any trade association. That statistic or ratio is duplicated in other industries as well. Most printers choose, for whatever reasons, not to join associations despite the fact that there are often many benefits in doing so.

“Most printers choose, for whatever reasons, not to join associations despite the fact that there are often many benefits in doing so.”

So why is it that this survey, as well as many others we have conducted, attract so many trade association members? The answer is pretty simple. We have been conducting surveys and polls in this industry for more than 25 years, and for most of that time we have worked closely with trade associations such as NAQP, NAPL, EPICOMM and more recently NPOA.

These are the associations that have provided directly or indirectly many of the various email lists we have used to market our surveys, so it should come as no surprise that a large percentage of our responses end up reporting they are members of one or more of these associations.

We try to lessen the skewing noted above by relying on two other lists – one a broad list containing more than 30,000 printers, and then a much smaller list of approximately 700 printers who belong to various “list servs” operating in our industry. The latter, who by their very nature tend to be very active in the industry, and these owners tend to respond when we distribute various polls and research studies.

We asked our survey participants to list any and all printing associations to which they belonged. The graph below depicts the responses from 163 companies that answered this question. Once again, a word of caution. This graph simply depicts those responding to our survey, and in no way reflects the distribution of association memberships industry-wide. 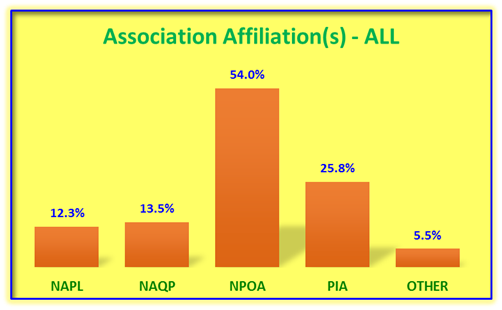 We then asked participants, especially those who checked-off more than one association, to tell us “which association you are most closely affiliated with in terms of involvement and/or interest.” One hundred and sixteen (116) firms answered this question, and as you can see 50% (58 firms) indicated that NPOA was their primary trade association. That also means that approximately 36% of the 163 respondents to our survey are members of NPOA. 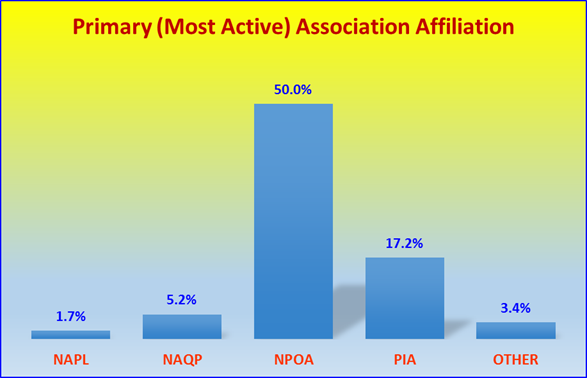 One of the more critical questions we asked in our recent poll involved asking respondents to rank 11 common association services. Respondents were asked to grade the choices ranging from “extremely important” to “not important.” The responses were tabulated and weighted on a 1-5 range. The results of that questions are shown below.
Ironically, at least to some degree, it appears that most trade associations are doing a poor job when it comes satisfying the desires and interests of most of their members, at least as expressed by the responses depicted in the following graph.

Compare the top four “Association Services” as indicated by respondents against what associations are actually providing and you find a wide disparity!

There is no doubt about it – surveys, research studies, sharing confidential information and special discounts with vendors requires the expenditure of a lot of time, energy and money by associations, but then one can’t help but wonder if associations are not spending money on the services and products desired by member where exactly are they spending money? 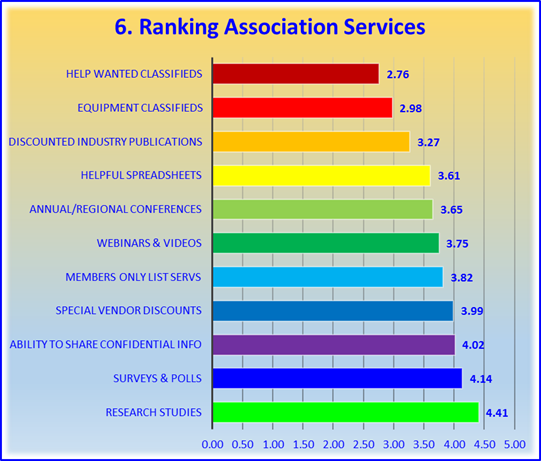 A more basic question is other than covering basic overhead expenses, exactly what are associations spending dues income on that directly benefits individual members. What are members receiving for his or her annual dues? Maybe that’s a question that needs to be asked and answered!

Once again, knowing that our results would tend to be skewed towards printers who are members of one or more trade associations, we nonetheless asked them how many conferences had they attended in the past three years. Below are the results: 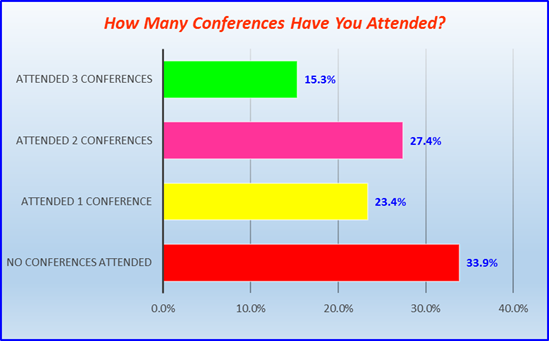 To put the above into perspective, 82 firms, or approximately 50% of our total respondents, indicated they had attended one or more conferences in the past three years. Once again, had we asked this question of a representative cross section of the printing industry, there is little doubt that the percent of printers who attend printing conferences (or even trade shows) would be substantially lower. (Note the discrepancy between numbers and percentages appearing in certain graphs and what we sometimes note is that not respondents answer all questions thus resulting in slightly different statistics.)

We asked owners who indicated they had attended one or more conferences why they chose to do so and we gave them five choices and they could make multiple selections. These are their responses. 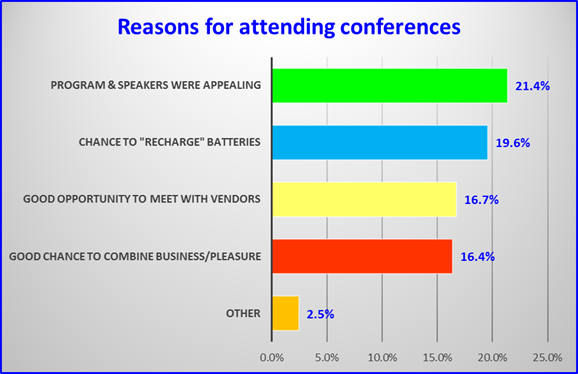 And Why They Don’t!

Associations, as a general rule, often tend to spend an inordinate amount of their time and resources promoting annual and semi-annual conferences – this despite the fact that it is rare that more than 25% of member firms who actually attend a specific conference. This is certainly not meant to imply that there are aren’t benefits to be accrued from such events, just that the typical association member who does not attend conferences often tends to feel they are getting the “short-end of the stick” when it comes to association services and programs conducted on their behalf.

Conferences rarely make money for associations, and in fact that it is an exception when they do, so it means that dues paid by members who do not attend conferences is often used to subsidize those who do attend conferences. When this happens, it tends to diminish the efforts of associations to serve their broader base. (If someone wants to dispute this statement they ought to do it by providing detailed financial statements to the contrary – something association should be doing all along but rarely do.)

Despite the editorial commentary above, there are many valid reasons why printers (mostly association members) do not attend conferences, and we asked our respondents to share with us some of those reasons. Unfortunately, even taking these printers at their word, there is little that an association can do to reverse or counter these objections. The answers or reasons for not attending a conference are provided below: 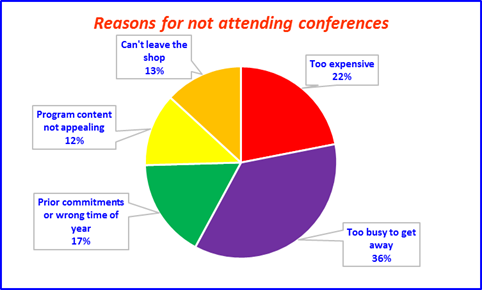 Since most of our survey dealt with associations, it was only natural to conclude our series of questions with the following: “Based upon your experiences in the past 6-18 months, how likely are you to renew your membership in the association indicated in question #5?” The results are shown below. We did conduct an initial sort by individual associations but the differences between one association and the next were not statistically significant. 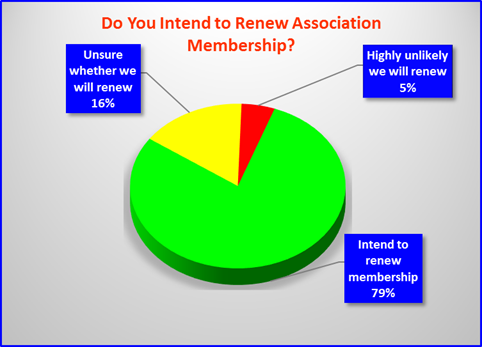 The 79% renewal rate reported is considered very good, but may be more optimistic than reality may suggest, because of a flaw in one of our questions. One respondent took us to task by noting that nowhere did we ask whether a member had been an association member in the past but did not renew.

The reality of this situation means that if an association loses 21% of its members every year, it must first replace those “lost” members with other new members just to stay even, let alone grow its membership. As printers recognize, if they lost 21% of their annual sales every year, it would present a constant financial and marketing challenge just to replace those lost sales dollars, let alone to grow sales one year over the next.

Associations live or die based upon their renewal rates, and every year associations must deliver to members a list of services and products that will convince the members to invest in the association for another year. Not enough benefits and some decide not to renew. Not enough renewals and income drops and without sufficient income there is no money for new services and products – a true Catch-22 scenario!

Conclusion and Thank You

As promised, we wanted to quickly present to our survey participants the results of our recent poll. We love doing these polls and surveys and we appreciate the trust and confidence that our readers express in us by participating in these surveys. We want to thank you for that trust and your participation.

We make no apologies for some of our editorial commentary. We have been writing columns and articles for more than 30 years, and it would be somewhat boring if we were not allowed an occasional “rant” or “rave” when we feel it is justified.