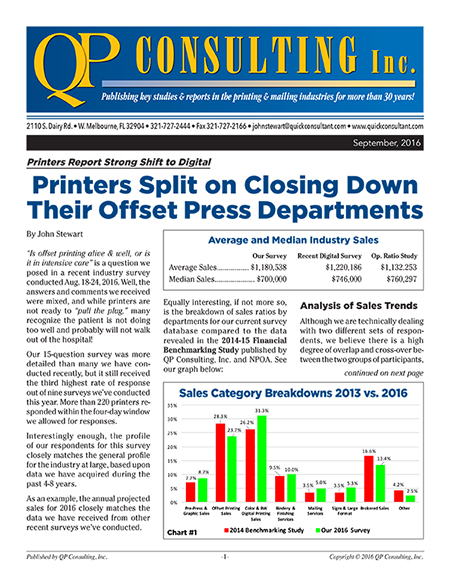 You can now download and print our 12-page report titled, “Printers Report Strong Shift to Digital,” by clicking here. If you wish to read it on line, the full article appears immediately below in the adjoining column.

The file is currently 12 pages, 8.5×11. To print as 3, 11×17, 2-sided pages from Adobe Acrobat > Print, > Page Setup in lower left corner, > Tabloid, landscape orientation. then > OK. Under Page Sizing and Handling, select Booklet. Then just choose 2-sided from your printer.

Printers Split on Shutting Down Offset Department
By John Stewart

“Is offset printing alive & well, or is it in intensive care” is a question we posed in a recent industry survey conducted Aug. 18-24, 2016. Well, the answers and comments we received were mixed, and while not all printers are ready to “pull the plug,” many recognize the patient is not doing too well and probably will not walk out of the hospital! Some are already making plans for the funeral!

Our 15-question survey was more detailed than many we have conducted recently, but it still received the third highest rate of response out of nine surveys we’ve conducted with more than 220 printers responding within the four-day window we allowed for responses. Continue reading →

The One Question We Forgot to Ask!

It looks like we may have set a record of sorts with our most recent survey titled, “Printing & Politics – Your Choice for President.” More than 270 printers responded within 48 hours, the largest number of responses to a survey in the past four years.

“More than 270 printers responded within 48 hours, the largest number of responses to a survey in the past four years.”

Unfortunately, after the survey “hit the streets,” and we were already processing the results, it suddenly dawned on us, especially after seeing the early trends, there was one question we wished we had asked but didn’t. We’ll let you know what that question was near the end of this survey. Continue reading → 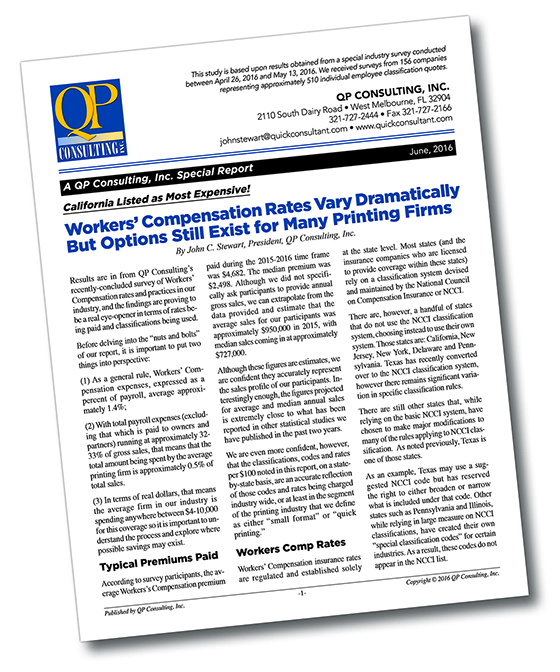 Workers’ Compensation rates vary dramatically according to a special 11-page report just-released by QP Consulting, Inc. However, contrary to popular opinion, owners still have options, to control or even lower annual premiums.

The new industry report includes a number of charts and graphs, including a special table detailing 35 states and the most common codes and NCCI rates per $100 for the four major classifications available in the printing industry – Clerical, Sales, Printing and Delivery.  Continue reading → 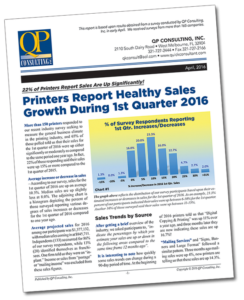 All firms participating in the survey were sent a private email with a link to download the confidential PDF Report.

If you did not receive an email it may be because you never provided a proper address. If you believe you did provide the necessary information, please contact us at [email protected]  and we will provide you with the proper link.

First, a big “thank you” to all of you who participated in our “quickie” survey about surveys. We were one shy of reaching the 200 mark in terms of respondents to the survey we conducted March 10-11, 1016.

Rating of Surveys – We first asked survey respondents how they rated the overall value of surveys and subsequent studies that have been published by QP Consulting, Inc. and the results were overwhelmingly positive with 84% of all respondents telling us they believe the studies we’ve published have been either “Extremely Valuable” or “Very Valuable.” Continue reading →