Turning Printing Companies Around
One Firm at a Time!
By John Stewart

Between the late 1990s and well into the first decade of this century I made my living providing individualized, on-site consulting services to printing firms throughout the U.S. and abroad. I sometimes joke with folks that while my short-term memory has really gotten bad recently, I can recall almost every single detail, including the layout of the shop and the problems encountered, involving the 400+ consulting visits I undertook in those days.

I consulted with printers in almost every state in the U.S. including two separate firms in Alaska. I also traveled to Australia, Brazil and Venezuela, the latter visit being exceptionally memorable because to this day I still vividly remember the press operators using gasoline as a press wash! I was still smoking in those days, but I was not alone – the press operators seemed fine with have a cigarette themselves as they washed up their presses!

I’ve often thought I could put on a pretty interesting seminar about all those consulting visits, and one of the first stories I would probably tell would be one about the owner of a business, who during an early morning conversation, asked me to step outside for some additional privacy.

Once outside, he confessed with a couple of tears running down his cheek that he had a personal crisis on his hands, a crisis so bad in his own mind that he had seriously contemplated suicide. He told me he actually had been thinking about taking this action during the past few weeks and was actually waiting to hear what advice I might have to offer. Continue reading →

Printers Split on Shutting Down Offset Department
By John Stewart

“Is offset printing alive & well, or is it in intensive care” is a question we posed in a recent industry survey conducted Aug. 18-24, 2016. Well, the answers and comments we received were mixed, and while not all printers are ready to “pull the plug,” many recognize the patient is not doing too well and probably will not walk out of the hospital! Some are already making plans for the funeral!

Our 15-question survey was more detailed than many we have conducted recently, but it still received the third highest rate of response out of nine surveys we’ve conducted with more than 220 printers responding within the four-day window we allowed for responses. Continue reading →

This Is the Most Detailed Pricing Study
Ever Published by QP Consulting, Inc. 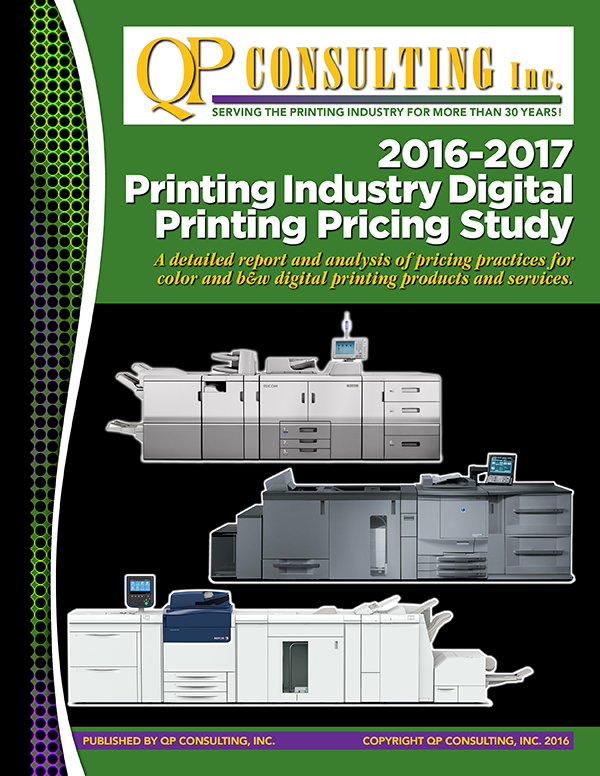 This brand new 114-page study is one of the most comprehensive pricing studies we’ve ever published.

Dedicated strictly to pricing of digital products and services, this new study is now available for immediate shipment (hard copies and PDFs). Retail price of this study is $229.

However, for a limited time, you can SAVE 25% on this study if you place your order between now and Nov. 23rd. Orders are shipped same day as received. Instead of paying $229, you will pay only $171.75!

“The Digital Printing Pricing Survey is the most valuable yet. The pricing info helped us identify irregularities, bringing some prices up to increase profits, and identify high prices that were likely resulting in lost business.”
Greg Batchelor
McCabe’s Printing Group
Fairfax, VA

Please Note – If you participated in this key industry study, it was emailed to you on Aug. 30, 2016. Please check your email in-box for an email with the subject line, “Attached is your complimentary 2016-17 Digital Pricing Study.” Continue reading →

Workers’ Compensation rates vary dramatically according to a special 11-page report just-released by QP Consulting, Inc. However, contrary to popular opinion, owners still have options, to control or even lower annual premiums.

The new industry report includes a number of charts and graphs, including a special table detailing 35 states and the most common codes and NCCI rates per $100 for the four major classifications available in the printing industry – Clerical, Sales, Printing and Delivery.  Continue reading →

Leaders vs. Laggards in the Printing Industry

I’ve been actively involved in the printing industry since the early 1970s, so I guess you would definitely consider me an “old-timer.”  Although relatively old in terms of physical age, I believe I am younger than most in the industry in terms of my enthusiasm for the industry and the belief that one can still make a very, very good living as the owner of a printing firm.

Sure, the industry has changed dramatically in terms of how we produce many of our products and services. But for every AB Dick or Ryobi press sitting idle back in the corner gathering dust, there is a digital printer up front that is probably producing an array of high quality printed products that would have been unheard of less than 10 years ago. But this article is not meant to address how much things have changed, but rather how much some things have remained in terms of key ratios and profitability. I think you will be quite surprised about some of the facts and figures revealed in the remainder of this article. Continue reading →

“As a general rule, truly profitable printers in this industry become and remain very profitable not by charging significantly more or less for their product, but rather by producing those products far more efficiently. Efficiency and levels of productivity can be easily and quickly measured by SPE or Sales Per Employee….. Continue reading →